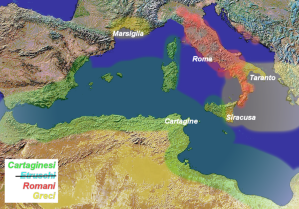 Are you puzzled by Carthage and Rome? You should be, if you’re learning about them through my thread on the historical backdrop behind the main story and main characters in my forthcoming book. So far, I’ve told you just enough to raise lots of questions.

Recap: There we are, in the third century BCE in the Mediterranean: the place is essentially a Greek (“Hellenistic”) pond, with two other powers–one mighty, seafaring and rich (Carthage); the other obscure, land-bound and provincial (Rome)–waving at each other from opposite shores. But one century later, the obscure upstart somehow completely erases the mighty and rich superpower, thereby changing our world forever.

How and why did this come about?

We will get there, but first, let’s take another look at Carthage and Rome before war broke out between them. Not only were these two city-states remarkably alike; they were also … friends!

Not cuddly friends, perhaps, but certainly cordial enough to have four treaties of friendship between 509 BCE and 279 BCE. The terms changed, but the essence stayed the same:

You see this summarized in the map above. The Carthaginian sphere of influence is light green; the Roman light red; the Greek light brown. Notice the three main centers of Greek civilization in this (western) part of the Mediterranean, which were Tarentum (today’s Taranto, in Italy); Syracuse (also Italian today, of course) and Massilia (today’s Marseilles, in France).

This is still a largely happy and peaceful picture. But along came a swash-buckling young lad–no, not Hannibal yet–who caused trouble. He was Greek, his name was Pyrrhus, and you’ve heard and used his name in its adjectival form many times. To be continued.