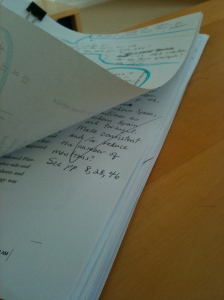 At this (quite advanced) stage in the book-publishing process, there is suddenly a lot to do, always urgently and usually without prior notice.

For instance, another dead-tree copy of the manuscript just landed on my desk, marked up in old-fashioned ink. Apparently, the cold reader had had his go.

The cold reader? Who knew? I normally prefer my readers warm.

It appears that Riverhead has sent the manuscript to someone who is anonymous to me (“cold”, I suppose) for perusal. His or her comments were not “large” (about the sweep of the story, or the logic of an argument, say), but very detailed queries about language.

All regular readers of The Hannibal Blog know me as a pedant (or word-lover, to be generous). I am rarely caught out in word matters. But it does happen, and I find that fun.

So here are a few things the cold reader pointed out, and then a few instances in which I overruled him/her.

Here are a few of the comments I overruled (getting a little frisson out of the STET every time):

28 thoughts on “Responding to my cold reader”