(Note to readers: I have corrected and updated this post here.)

So the other day I get a text message from our dear friends, the Rammings, with an urgent plea to intervene in one of their heate 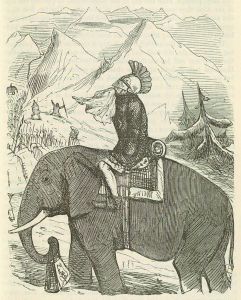 d controversies around the dinner table of their rustic farm house in hip and rural North Carolina. James Ramming, aged eleven and studying Latin (and contemplating adding Greek), was contesting whether Hannibal’s famous elephants were …. Indian or African. It’s the obvious first question to ask about his elephants, which must be why the adult experts never ask it.

I pick up the phone and report for duty. And as I talk I discover …. that I have no idea what the answer is. So I extricate myself from the conversation with James and go back to our trusted old friends, Polybius and Livy. Those two, it turns out, didn’t even know enough to ask the question. (How many elephants would a Greek and a Roman historian in those days have seen?)

The fact that Hannibal took war elephants with him in his attack on Rome–and crossed with them over the snowy Alps–is usually the first and only thing that people know about Hannibal. It’s entered our collective lore. Above, a snivelly-nosed Hannibal on a (vaguely Indian-looking?) elephant who seems to be going shopping. Below, a more dramatic rendition of the Alpine crossing, with (vaguely African-looking?) elephants tumbling into the gorges as the mountain Gauls attack from the heights. (Actually, Polybius says that all the elephants survived.)

Well, which is it? One line in the middle of this Wikipedia entry claims that

Makes sense. After all, Carthage was in Africa. Except that I don’t think so. I’ve already written about the trouble we get into when we confuse Carthage’s geography with modern notions of human race, what we might call the “Denzel trope”. I think the same applies to elephant race.

This Wikipedia article talks about the origins of war elephants in India. It is these that Alexander the Great would have encountered. Then he died and his generals, notably Seleucus and Ptolemy, carved up his empire to start their own kingdoms. They also seem to have taken over the tradition of fighting with war elephants. Carthage’s mother city, Tyre in modern Lebanon, was in the Seleucid empire, which included Syria. I think that Carthage, a naval empire oriented toward its mother city in the East more than toward the lands south across the Sahara, would have got its elephants from there. Hence, they would have been Indian.

That might explain why Hannibal’s favorite elephant–the one he was riding through the swamp when he caught the infection that blinded one of his eyes–was named Surus, “the Syrian”.

In any case, those beasts scared the bejeezus out of the Romans. War elephants were the tanks of antiquity. If things went according to plan (a big if), they plowed into the enemy ranks and broke up the formation. All the time, the archers and javelin-throwers were firing from their little fortress mounted on the elephant. Check out this fearsome rendition of the battle of Zama: 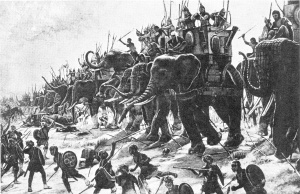 I’d rather be one of the guys on top in that one. Except……

Except that this was one of those many cases where things went wrong for the side with the elephants. Modern tanks go kaputt but not berserk. Ancient tanks went berserk. If they panicked, they were as likely to turn around and plow into their own ranks (the elephants didn’t care, after all). That happened here at Zama. For that reason, the elephants usually had mahouts with lances (you can see them in the picture), whose job was to kill the elephant as soon as he or she (both males and females were used) threatened the home side.

Long story short. Probably a sub-species of Indian. And soooo much fun to imagine. More, much more, in future posts.

12 thoughts on “About Hannibal’s elephants”