Heard about my victory?

You’ve heard of Pyrrhic Victories, which are defeats disguised as triumphs–in other words, Kipling-esque impostors of the sort that I will be describing in my book. But do you know why they are called that?

It’s thanks to Pyrrhus, who is well worth five minutes of your time.

Pyrrhus was the ancient world’s equivalent of a dumb jock whom all the girls loved, who bashed the equivalent of Budweiser cans on his forehead and beat up the enemy football team but never quite figured it all out.

Put differently, he was the King of Epirus in northern Greece, and wanted to be like Alexander the Great, who died a couple of generations before him. (Pyrrhus in turn died a generation before Hannibal was born.) He wanted to be a hero and to conquer. Basically, that’s all there was to it. And he was great at it–brave, courageous, strong. Plutarch says that once, when he was thought dead on the battlefield, he just got up and cleft an enemy soldier in two pieces with one blow of his sword.

One day, an opportunity came up: Tarentum, a Greek city in southern Italy that was fighting the Romans, invited Pyrrhus to come over and fight Rome on their behalf. Pyrrhus was thrilled. As he was preparing to leave for Italy with his army and his war elephants (sounds a lot like Hannibal, doesn’t it?), he had a conversation with the wise Cineas. This is one of my favorite exchanges in antiquity. Here is Plutarch’s version:

Cineas: If we beat the Romans, what should we do next?

Pyrrhus: Why, then we’ll be masters of all Italy.

Cineas: “And having subdued Italy, what shall we do next?”

Cineas: “But will the possession of Sicily put an end to the war?”

Pyrrhus: “We will use that as the forerunners of greater things” such as Libya and Carthage. Would anybody resist us after that?

Cineas: “None,” for then we can take Macedon and even all of Greece. “And when all these are in our power what shall we do then?”

Pyrrhus: “We will live at our ease, my dear friend, and drink all day, and divert ourselves with pleasant conversation.”

Cineas: “And what hinders us now, sir,” from doing exactly that?

At this Pyrrhus was nonplussed. But left for Italy anyway!

Next, he had his Pyrrhic victories. He beat the Romans, but each time he lost so many men and gained so little that once, when congratulated on yet another victory, he sighed: “Another such victory over the Romans and we are undone.”

Eventually, as he was wont, he got distracted. There was another opportunity for glory in Sicily, so he sailed around a bit there and bashed a few heads. You can see on that map what that trip (dare I say his life?) looked like. 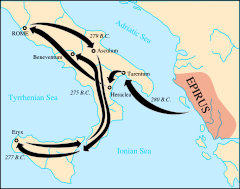 In any event, Sicily also failed to make him happy, so eventually he made his way back to Greece.

Once home, he kept fighting wars here and there. I mean, it’s a hard habit to kick! His end came as it had to come (irony alert): He was in the middle of some vicious street fighting in a Greek city, when an old woman on a rooftop dropped a tile, which landed on his heroic pate and knocked him dead. So it goes, as Vonnegut would say.

Have you ever been a Pyrrhus in your life? Do you know any Pyrrhuses?