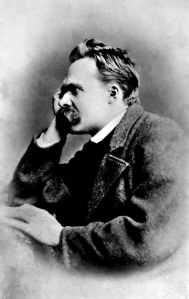 I vote on values

In this, the fourth, post in The Hannibal Blog‘s search to find the world’s greatest thinker ever, let’s examine another criterion: In order to be the greatest, does the thinker have to be the most expansive–ie, largest–in scope?

My short answer is No, but, as with the previous criterion, there is a catch.

The answer is mostly No because the great is the enemy of the good. Intellectual overstretch is a problem, and most of the great thinkers in history were great precisely because they chose one well-defined are of human interest for their contribution.

The converse is also true. As you will by now have guessed, I am a fan of Einstein’s. But Einstein’s light began dimming at the exact point, in mid-career, when he began to look for a theory of everything, a grand unifying theory, an idea that would explain not just something but all things. Up to that point, he had chosen one thing at a time (light, gravity, time, etc) and had done, ahem, rather well.

So let’s begin a short and explicitly incomplete sub-series of posts on truly great thinkers who shed light on one particular area of interest. Consider these the “honorable mentions” in my search. (There will also be a runner-up, and then of course a winner. If you consider this suspenseful, I feel flattered.) I have no doubt that you will let me have it, as always, in the comments. Today:

Area of interest: The origins of “morality”

Why great: Because he exposed so much of bourgeois “values” as the hypocritical piffle that it is. With highly original and ingenious methods (tracing the evolution of words), Nietzsche described the process in which “healthy” and natural values become inverted and perverted in the process of “civilization”. The masses of the downtrodden feel ressentiment at the strong and healthy, and finally stage a slave revolt in which the high is redefined as low, the good as evil, the strong as cruel; and, conversely, the weak as good, the impotent as chaste, the poor as humble et cetera.

Comment: As with all thinkers, you don’t need to believe it all; but keeping Nietzsche in mind is fantastic armor against some of the glib moralistic bilge that assaults us daily.

27 thoughts on “Great, if not greatest, thinker: Nietzsche”