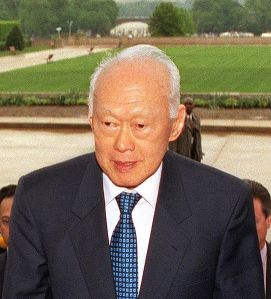 Just one quick follow-up to the last post on Darwin: I was reminded of a controversy from my days in Asia, involving Lee Kuan Yew, the “founding father” of Singapore. (Most Asian controversies seem to involve Lee Kuan Yew, if you look closely enough.)

He had once opined on the truly bizarre situation that humans have created today. Biologically and historically, the “fittest” (most adapted) members of a population are the ones whose genes (alleles) are most represented in future generations. Lee Kuan Yew, perhaps contemplating his own daughter, who was then a neuroscientist as intellectually impressive as she was single, observed that

our brightest women [are] not marrying and [will] not be represented in the next generation. The implications [are] grave.

Some of the fittest among us, in short, are voluntarily opting out of evolution. A biologically suicidal strategy, and thus worthy of study.

4 thoughts on “Lee Kuan Yew on Darwin and breeding”