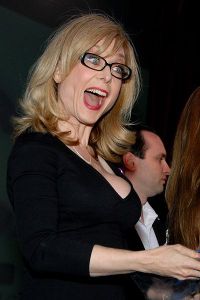 In my case, I was just a tad shy for the first few moments. It helped that I have never “consumed” Nina’s “content” so I had no visuals to distract me. Still: How would I talk to somebody who views having sex as I view writing?

It turned out that Nina was very easy and very interesting to talk to. The conversation ranged just as it would have ranged with anybody else. Our health care debate drives her “mad.” California can’t govern itself. That sort of thing.

Performing sex on camera, she said, is

a highly paid form of blue-collar work… sort of like farm labor.

Everybody is an independent contractor and there are no benefits. No benefits. It’s important in such a conversation not to reach for the double entendres.

So why is she still in it?

In large part because she actually likes the sex, she told me. She thinks that women increase their sensitivity in middle age. At least that is happening to her.

My enjoyment of sex has increased, but for most [performers] it goes down, especially the men.

I asked her if she meant that doing it on camera makes people “numb.” Sometimes, she says. Many performers stop having sex in their private lives altogether. The men basically have to, since they couldn’t have private sex, then perform as well the next day on camera, and any hint of “having trouble” might kill their career. But they also genuinely lose interest.

Nina sees her role now as “mentor” as well as actress, so she counsels the young performers not to let that happen.

Frankly, it amazes me that it–burning out–hasn’t happened to her. She must be a modern Aphrodite.

9 thoughts on “How not to burn out sexually: Nina Hartley”