Today, a story about trust — the need for it, and the horrible consequences of losing it. The lesson comes wrapped in the myth of Orpheus.

So far in this evolving thread on heroes and heroism, I’ve looked at the brute archetype of a hero (Hercules), the more refined classical archetype (Theseus), and a more complex and ambiguous hero (Jason). They were all not only Greeks but also Argonauts — ie, they boarded the ship Argo to accompany Jason on his quest to get the Golden Fleece. The main purpose of that ship, besides conveying Jason on his quest, seems to have been precisely that: to establish who did and did not count as a hero.

Therefore it is clear that the Greeks considered Orpheus, also on board, a hero as well. And thereby the pattern of increasing complexity in the idea of heroism continues. Orpheus, I would say, was the first “romantic hero” in the history of storytelling.

Not strong but gifted

Who was Orpheus? A Wunderkind. He had the best singing voice in the world, the best musical ear, the most sublime talent for moving humans (and even animals and trees and rocks) with sound. He may have been the son of Apollo, the god of (among other things) music, and Apollo personally taught Orpheus to play the lyre. Whenever Orpheus filled the air with sound, nature relented and sighed and swooned.

That’s the first sign that he was a romantic hero — he was not known for his strength, as Hercules was, but for a talent.

Nonetheless, he was also brave, or at least bold. But his heroism had a different motivation. Orpheus did something heroic not because he could (Hercules) or because he had a public duty (Theseus) or because he wanted to reclaim a throne and power (Jason) but because he … loved.

He loved a woman named Eurydice and they married and lived in bliss. But one day (her wedding day, in some versions), Eurydice was walking through a meadow when a venomous snake bit her. She died and went to Hades, the underworld of shadows.

Orpheus was inconsolable. He decided that he could not live without Eurydice, so he set out to do something very bold: He went down to Hades, as a living human visiting the dead, to plead with Hades to give Eurydice back.

To get down there, he used his talent. When Cerberus, the huge three-headed dog who guarded the underworld, blocked his path, Orpheus sang so sweetly that Cerberus wagged his tail and let him pass. When Orpheus reached the dark and stinking river Styx, he sang again and Charon, the ferryman, was moved to bring him across.

And so he arrived among the ghosts and shadows of the dead, keeping fear at bay by thinking only of his beloved. He appeared before King Hades and his queen, Persephone, and there sang and played his lyre more beautifully than he ever had before (pictured above).

Persephone in particular was moved that a man could love a woman so much, and Hades, also touched, relented. He would give Eurydice back to Orpheus — ie, make her alive again — on one condition.

The difficulty of trusting

That condition was simple: Eurydice would follow behind Orpheus up to the world of the living, but Orpheus was not to turn around to look at her.

So she was called and Orpheus began the long way upwards toward the surface of the earth. He could not hear footsteps behind him, but of course he knew that Eurydice was still a shadow and had no weight yet.

Orpheus kept climbing and looking forward with determination and focus. At last, he saw the first rays of light at the top.

But doubt seized him. What if Eurydice was no longer there? What if she had never been behind him to begin with?

Orpheus forgot himself and … turned.

And as he turned, he got one last glimpse of his beloved. Eurydice had indeed been behind him all this time, just as Hades had promised. But now, because Orpheus had turned, she dissolved back into the darkness. With a look of unbearable sadness in her eyes, she returned to Hades — this time forever. 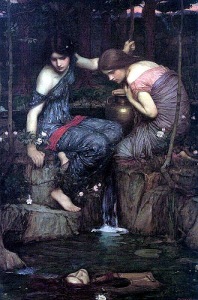 So Orpheus returned to the world of the living alone. But who calls this living? He was a broken man. His songs and music were henceforth desperate and made animals and plants cry.

Eventually, a group of women (or nymphs or beasts) who could not bear it anymore tore him to pieces and threw his lyre and body parts into a river.

Nymphs (above) saw Orpheus’ head floating downstream, still singing its mournful song of love bereft and trust betrayed. Perhaps his shadow, when it arrived in Hades, found Eurydice’s at last.