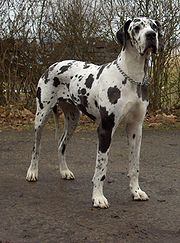 As you know by now, I am an amateur etymologist (ie, one who is probably wrong most of the time). And when I’m not tracing words from Western languages to Sanskrit, I like to ponder the languages I know best, which are English and German.

And it’s the little quirks that I enjoy.

Thus, for instance, it is no surprise at all that most Anglo-Saxon words in English have the same, or a very similar, root as their German equivalents:

Slightly more interesting is the subtle but cumulatively substantive change in connotation of certain words that once (in the fifth century) were the same:

But (and this has caused much humorous confusion), bekommen in German now means get, not become. Keep this in mind next time you hear a German tourist inquiring of his waiter whether he might please become a hot dog.

And here is the one that really puzzles me. Etymologically, it is obvious that

Except that something strange has happened.

Dog is the generic English word for the entire species. But Dogge is the specific German words for just one breed within that species, the one English speakers call … the Great Dane (thus dragging a third Germanic nation into this).

Hund, meanwhile, is the German word for the species, whereas hound is a somewhat more specific English word for a type of dog used for hunting, such as this one: 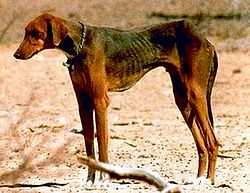 Divided by a common language, as Churchill might have said once again, had he also known German.