What does Joan of Arc — Jeanne d’Arc in French — say about our notions of heroism?

I’ve been pondering this for a while. So far in this thread on heroism, all the heroes have been male (and mythological). So the question of feminine heroism, raised but not satisfactorily addressed, has become more urgent.

So I read Larissa Juliet Taylor’s biography of Joan: The Virgin Warrior: The Life and Death of Joan of Arc.

Taylor takes the dry — quite dry! — historian’s approach to Joan, and that was the approach I wanted for my purpose. Who was the actual woman, rather than the “saint” and statue that we have made of her. (Yes, in 1920 she officially became a saint.)

So here is I) the background, II) her story, and then III) my interpretation:

Joan lived her short life — she was executed at 19 — in the 15th century, during what we retroactively call the Hundred Years’ War between England and France.

The most important thing to understand about this time is that nations or countries as we understand them did not yet exist. Instead, there were kingdoms and dynasties, shifting constantly depending on which royal married and procreated with which other royal.

“England” was ruled by French-speaking Norman royalty which, to complicate matters, frequently married royals from “France”, which were in turn more or less descended from Frankish (Germanic) royalty. (I venture to say that the common people neither understood nor cared who ruled them.)

As Joan was growing up, the English king claimed also to be King of France and held most of northern France, including Paris. He was allied with Burgundy, another originally Germanic kingdom that we today consider “French”.

Another contender to the throne, Charles Valois, considered himself dauphin but was considered wimpy and weak. The map above shows the lands under his control as “France”. This portrait of him, I believe, says it all: 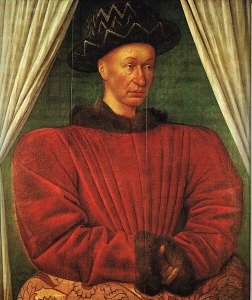 Joan was born into a family neither poor nor rich — we would say “middle class” — in the Anglo-Burgundian part.

She was different from the other girls. She didn’t go dancing with them, and seems to have been a bit of a killjoy. She was constantly praying, and obsessed with the Virgin.

Starting at the age of 13, as she later claimed, she began hearing “voices.” The voices told her to go “to France.” She decided that the voices belonged to angels or saints.

Also around this age, she vowed to remain a virgin for the rest of her life. No reason given. She just did. This later became part of her mystique: She became La Pucelle (The Maid), which implied not only virginity but nobility and purity and innocence.

She became what we could call deranged. If she were alive today, she might be a suicide bomber. Guided by her voices, she wrote a famous “letter to the English”. In it, this teenage girl informed them that she would have mercy on them (!) if they did exactly as told, but that

In 1429, aged 17, she set out to meet the dauphin Charles — ie, she left the “English” part of France and traveled to the “French” part, specifically a chateau on the Loire where Charles was staying. Already, she had short hair and wore only male clothing, as she would from then on.

When she arrived at the chateau, Charles’ advisers reacted as we might: They thought she was loony. They questioned her for a while. Joan told them that she was on a mission

So the counsellors admitted her to see Charles. Charles also thought she was mad, or at least suspicious. But she was offering to make him king, and he had no other plan.

So Charles sent Joan to another town for a month for a thorough “theological validation.” This was their equivalent of psychoanalysis — the churchmen being the shrinks. Joan conducted herself well. Even her claims to virginity survived, ahem, examination.

So Charles saw her off to Orléans and put her in charge of some troops. Joan put on shining armor and set off. In the picture above, she is entering Orléans.

She sent another letter to the English:

… King of England, … if [the English forces] do not obey, I will have them all killed. If they obey, I will show mercy. I am sent here by God, the King of Heaven, to kick you out of all of France….

She perplexed but also fascinated every man there, both “French” and “English”.

She had one mode only: Charge!

She did not know doubt.

So she told the defenders to charge, and charge they did. In confused fighting, with Joan even getting wounded by an arrow, the tide turned and the English retreated from Orléans.

Suddenly, everybody either feared (if “English”) or adored (if “French”) the Maid.

Joan now led a laddish camp life. She was one of the guys. She got most angry whenever female “camp followers” came near her boys. She personally attacked the ladies with her sword to keep her soldiers pure.

Apparently feeling invincible, Joan led Charles’ forces to several more victories. Then it was time to bring Charles to Reims for his coronation. And thus the dauphin became Charles XII, King of France.

Charles, however, distrusted Joan more than ever. She seemed just plain deranged to him. Furthermore, Charles now had to begin the adult and mature business of negotiating with Burgundy and England to settle this mess in a civilized way. Joan, however, was constantly going on about her voices from the angels. She appeared not to understand the geopolitical context she was in. Which would be understandable: she was a teenager.

Joan, knowing only her one mode (Charge!), kept charging until she fell off her horse and was captured. In 1430 she was brought to Rouen, English-held Normandy, and put on “trial”.

The English did not prosecute or judge Joan. Instead, it was the French and Burgundian churchmen. Yes, they were aware that the power of the land, England, considered Joan a political problem. But their main bugbear seems to have been more Freudian-patriarchal. Joan threatened … something.

The obvious problem was to find something to accuse her of. What had she actually done?

The trial notes show the church, if not all religion, as silly, petty, ridiculous, irrational, vindictive and dumb. The inquisitors asked questions that were stupid, and Joan made fools of them.

The charges, when read, compensated for vagueness with length. Joan was to be tried

as a witch, enchantress, false prophet, a caller-up of evil spirits, as superstitious, implicated in and given to magic arts … [She was] scandalous, seditious, perturbing and obstructing the peace … [and she] indecently put on the ill-fitting dress and state of men-at-arms…

Up on the scaffold she went, and onto the stake. They burned her. She died of smoke inhalation before she burned, but it was a cruel spectacle nonetheless, and nobody enjoyed it.

Her legend was born in the decades and centuries after her death.

She became, to different people at different times:

Indeed, her retroactive importance is largely that she helped to bring about this concept of “France”.

So, was she a heroine?

Joan seems to belong to a small category of heroines who choose to remain virgins, dress up as boys and then fight with the boys.

China’s Joan, for example, might be Hua Mulan (pictured). Greece’s Joan might be Atalanta; Rome’s might be Camilla (who fought and died in the Italian wars against Aeneas).

But there is an obvious problem with such hermaphroditic or asexual heroines: Their heroism seems in large part to require denial of their femininity. That would suggest that heroism really is a male thing and the girls can play with the boys only if they pretend to be boys. I don’t like that at all.

Contrast that with a variation on her theme: the hyper-sexual warrior woman.

Here, for instance, is Brunhilde of Norse myth, with considerable Va Va Voom: 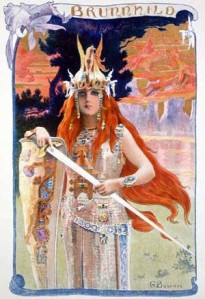 Then, of course, there are the Amazons, who not only fought but slept with male heroes, including Theseus and Hercules.

These women are seductive and fertile as well as brave and strong, and thus the direct primal equivalent of their male counterparts. As heroines they celebrate their sex rather than hide it. In fact, the Amazon queen, Hippolyta, seems to have been the model for Wonder Woman: 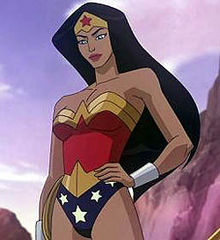 So Joan does not do it. She was a clueless teenager fired by inappropriate certitude (which describes pretty much every teenager) who never had the chance to grow into a whole person and become a genuine heroine.

But there are plenty of those out there, and The Hannibal Blog intends to find them

65 thoughts on “The wrong heroine: Joan of Arc”