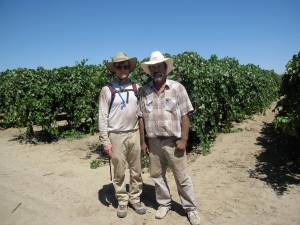 Here I was the other day in California’s San Joaquin Valley, with a crop buddy, after a day of picking grapes. It was 105 Fahrenheit (40 Celsius). I was drenched in toxic pesticides, which I was unable to avoid while picking.

What on earth was I doing there?

Well, it’s part of a little literary project, something longer-term. Can’t say much more yet.

We happened to be standing a few hundred yards away from the location of a Depression-era government camp for migrant farm workers which became the basis of John Steinbeck’s fictional Weedpatch Camp in his unforgettable novel The Grapes of Wrath. This was the camp that took in the Joad family and gave them brief respite from their harsh existence.

Was my location a coincidence? Not entirely. Nor was it entirely planned. (Sometimes, “accidents” help in the creative process.)

In any event, I took the occasion to re-read The Grapes of Wrath and also to read a bit about Steinbeck’s writing of it.

I wrote The Grapes of Wrath in one hundred days, but many years of preparation preceded it. I take a hell of a long time to get started. The actual writing is the last process.

This fits my own experience: The actual writing (sadly) is almost an afterthought, the easiest and most pleasant and shortest part of conception.

(But Steinbeck wrote longhand, of course. His 200,000-word manuscript took up 165 handwritten pages of a lined ledger book.)

Steinbeck apparently wrote fast, paying little or no attention to spelling, punctuation, or paragraphing. All that was cleaned up later. That, too, fits my experience. 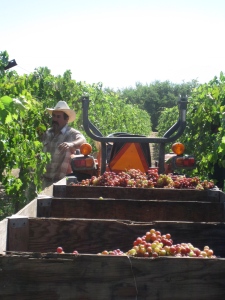 In a 1952 radio interview, Steinbeck also said something else:

When I wrote The Grapes of Wrath, I was filled . . . with certain angers . . . at people who were doing injustices to other people.

And six years later, he told a British interviewer:

Anger is a symbol of thought and evaluation and reaction: without it what have we got? . . . I think anger is the healthiest thing in the world.

I had to think about that for a minute. But then this also fit my experience as a writer. Anger is a great motivational spur. It focuses the mind and leads to energetic storytelling. And isn’t writing a wonderful channel for anger to be released? Way better than any alternative, methinks.

Also of obvious interest to me (given that I’m writing a book about success and failure being impostors) was what the mind-boggling success of The Grapes of Wrath did to Steinbeck.

Critics, agents, publishers — the whole world naturally wanted him, as one said,

to write The Grapes of Wrath over and over again.

(That reactive and retroactive instinct in publishing also strikes me as familiar.)

But Steinbeck refused, saying that

The process of writing a book is the process of outgrowing it… Disciplinary criticism comes too late. You aren’t going to write that one again anyway. When you start another—the horizons have receded and you are just as cold and frightened as you were with the first one.

In another interview, he said that

I have always wondered why no author has survived a best-seller. Now I know. The publicity and fan-fare are just as bad as they would be for a boxer. One gets self-conscious and that’s the end of one’s writing.

Here, of course, I have nothing to add (not having scored a best-selling success yet). But it does rhyme beautifully with what Amy Tan said on the same subject.

Below, by the way, you see my perspective as I was picking grapes: I was crouching below the vines, because the best bunches grow in the middle and underneath. (“Low-hanging” fruit are not necessarily “easily picked’ fruit, I discovered.) And that tractor constantly moves alongside you. Several times I almost had my feet run over, and it banged into my shins so often that I could barely walk at night. 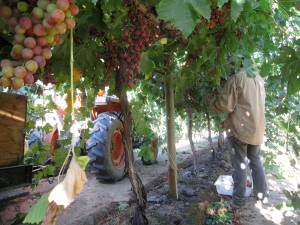