Like many of you, I’ve been following, with shock and amazement, the tale of Greg Mortenson, the author of Three Cups of Tea.

If 60 Minutes is correct (and with allegations such as these, the target deserves the benefit of the doubt), then Mortenson fabricated much of his best-selling book.

But then I remembered this talk by Chris Chabris, a neuroscientist, in which he talks (starting at minute 5) about “the illusion of memory.”

In brief: We trust our memories, but we shouldn’t, because many of them are wrong. The human brain reconstructs the past by telling stories (an extremely familiar idea here on The Hannibal Blog), and it does so by conflating different events, people, times and anecdotes. So when politicians (among others) seem to “lie” about their past (remember Hillary Clinton dodging sniper fire in Bosnia?) they are probably making honest and all-too-human mistakes of memory. (Whether this applies to Mortenson, I have no idea.)

In any event, as I was watching the 60 Minutes report, a fear suddenly struck me. What if I myself misremembered anecdotes in my own book? (To be published, as it happens, by Riverhead, which is part of Penguin, which also owns Viking, which published Three Cups of Tea.)

So I thought of the personal bits in my book. There aren’t that many personal memories — most of it is based on history and biographies, with sources. But there are some. For instance, there is a part where I recall burrowing through the dusty shelves of the library at the London School of Economics, in 1994 or 95 when I was a graduate student there, and finding, to my considerable surprise, a book that turned out to be the PhD thesis of my father. I remember how the book cracked as I opened it, and I recall noticing that nobody had ever checked it out.

Never mind why I told that little anecdote in my book (it makes sense in the context). Suddenly I was afraid whether this was in fact how it happened. Was it there, at the LSE, where I found it? Or perhaps at the nearby University of London library? Or perhaps around that time at some library in Germany? Does the LSE library even have the book? (That would be very embarrassing.) If I did find it there, is it true that nobody had ever checked it out? Was the cover grey, as I recall? Had I just dreamt the whole damn thing?

So I fact-checked my own memory.

Fortunately, the LSE library does have the book, as can nowadays be ascertained online. What about the rest?

So I called the library. I expected a phone tree. There was none. Somebody named Andy Jack answered.

Having spent years in California, I have learned never, unprompted, to attempt irony or humor because that can fall so utterly flat in America. So I was bracing myself for a long and complicated explanation and an awkward request for help — in short, a conversation as pleasant as calling, say, an American health insurance company.

Instead, within seconds, I was reminded of my old world over there: For Andy was, of course,

I barely got out three or four words (alumnus … book … Three Cups of Tea… anecdote…) when he understood.

His reply came in a tone that contained … irony. Very subtle, just a nod, really. At once, I knew this was going to be easy, unAmerican.

At that instant, I realized that he was already walking up the stairs. Whither? To the shelf! Before I knew it, he was holding my dad’s thesis in his hands and confirming my memories.

What a relief. I had remembered everything correctly. The cover is blue now, but that’s because the book literally fell apart at some point and had to be rebound. Andy told me it has 164 pages, plus 22 more of references. My dad’s name is in gold. It has indeed never been checked out, at least not since they changed computer systems, which was after my time. But it has no barcode :), so it could not have been checked out!

Andy, by this point, took pride, you understand, in making an anecdote in a book — my book, unpublished and completely unknown to him — correct and good. If you’re reading this, Andy, thank you.

I know, I know. You’re at the edge of your pew. What was my dad’s book about?

Why his PhD thesis, published in Bonn in 1967, was not an international bestseller, nobody knows. Its sex appeal is obvious. The title is:

That means something like: Problems with a general liberalisation of international trade

I divulge this reluctantly, because you may pounce on the copy, spread the meme virally, and we all know where that might lead for my dad: Sudden fame, groupies, temptation, trashed hotel rooms, my mom destabilized.

The regulars among you might already have made a few other connections: 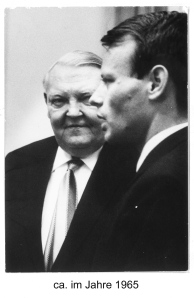 18 thoughts on “My memory, found again in the LSE library”