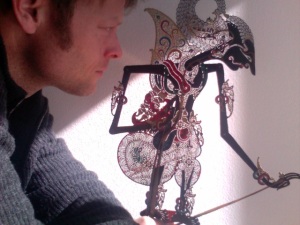 Here I am playing with Arjuna, the greatest hero of the East, in the form of a wayang puppet I bought in Solo, Java.

Wayang is an ancient Indonesian theater tradition in which the shadows of puppets are cast onto a screen. Solo is its historical center, so a few years ago I went there to watch. Here is what a play looks like from the audience side:

And what story do the Javanese, nominally Muslim today, most like to perform?

The story of Arjuna and his brothers, the five Pandavas, pictured above. It doesn’t matter that this epic, the Mahabharata, is what we would consider a “Hindu” story. It is for Asia what the Iliad and Odyssey and other Greek myths are for us in the West.

This makes Arjuna the Achilles, the Hercules, the Odysseus, the Theseus, the Jason and the Aeneas of the East.

And what does that say about the East’s view of heroism, which I have been exploring in this thread?

At first blush (and deceptively, as you will see), Arjuna’s heroism looks familiar to us in the West.

He was a great fighter, an ambidextrous and precise archer, indeed an Indian Apollo with arrows. He practiced in the dark, the better to hit his victims during the day time. He won the hand of his wife, Draupadi, in an archery contest remarkably similar to the one Odysseus won against the suitors at Ithaca to regain his wife Penelope. 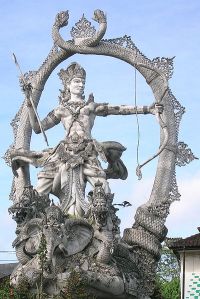 Arjuna was also the biggest hero in the biggest war of mythological India. What Achilles was to the Greeks at Troy, Arjuna was to the Pandavas at Kurukshetra (Kuru’s Field) in northern India.

The Pandavas were leading a huge army in a righteous cause against their own cousins, the Kauravas, also with a huge army. The Kauravas had stolen a kingdom from the Pandavas in a rigged game of dice, humiliating Draupadi in the process. The Pandavas went into exile, but then came back, seeing their duty as fighting to reclaim their kingdom and honor.

For eighteen days, battle raged. Millions died and fewer than a dozen men survived. Blood turned the field of Kuru into red mud. Arjuna and his brothers shot so many arrows into one of their enemies that the man fell from his chariot and landed not on the ground but on the arrows sticking out from his body like the quills on a porcupine.

But Arjuna also lost his own loved ones. His sons and nephews died in the battle, just as the Greek and Trojan heroes lost their friends and family.

But the part of the story that is most famous — rather as the brief episode of Achilles’ wrath in Homer’s Iliad is the best known part of the story of the Trojan War — is a poem embedded into the Mahabharata just before the fighting began. And that is the Bhagavad Gita, or song of God. (Try one of these translations.)

On the eve of the battle, with the two armies already lined up against each other, Arjuna and his charioteer steered their war chariot into the space between the two armies to contemplate what was about to happen. The charioteer was Arjuna’s friend and adviser, Krishna. 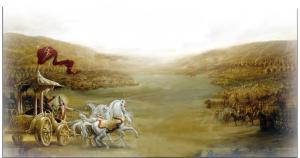 As Arjuna gazed from his chariot at the two armies, he suddenly lost his will to fight. He was afraid. Afraid not only of losing his own life, but also for the lives of his “fathers, grandfathers, teachers, uncles, brothers, sons, grandsons, fathers-in-law, and friends.” Because this was a war within a family. He had loved ones in both armies.

As I see my own kinsmen, gathered here, eager to fight, my legs weaken, my mouth dries, my body trembles, my hair stands on end, my skin burns.

Arjuna dropped his bow and arrows and collapsed on the floor of his chariot, sobbing.

And now Krishna began to talk to Arjuna. Gently but firmly, he reminded Arjuna of his duty. The Sanskrit term here is dharma, and it seems (in this context) pretty close to Aeneas’ Roman virtue of pietas (“piety” derives from it but has come to mean something different).

What follows in the Gita is history’s most fascinating dialogue about how to yoke (as in yoga) the human mind into harmony with its situation.

restless, unsteady, turbulent, wild, stubborn; truly, it seems to me as hard to master as the wind.

Krishna in turn teaches Arjuna how to make his mind calm, as a coach might try to get an athlete into “the zone”. (As it happens, Krishna’s advice is the same as Patanjali’s, which is why those two texts together are considered the foundation of Yoga.)

What, in a nutshell, does Krishna tell Arjuna?

To “let go”. To let go his fears of what might happen the next day, to let go the worries, the anxiety, and also the hopes and anger, and all the rest of it. In fact, Krishna wants Arjuna to

let go of all results, whether good or bad, and [to be] focused on the action alone… [to] act without any thought of results, open to success or failure. This equanimity is yoga.

4) Arjuna in your mind, my mind

And this is the essence of Arjuna’s heroism: He shows us, with the help of his divine “inner voice” of Krishna, how to make our minds calm so that we can go on with life whenever it seems to overwhelm us.

Arjuna’s heroism is, like Aeneas’ but more so, an inner victory.

In fact, this applies at an even higher level. Here is how Mohandas Gandhi explained why he, a proponent of non-violence, saw truth in this story of war:

Under the guise of physical warfare it described the duel that perpetually went on in the hearts of mankind, and that physical warfare was brought in merely to make the description of the internal duel more alluring.

Arjuna, it turns out, is meant to be a part of my mind and your mind and everybody’s mind. It is the clearest and best state of mind, called buddhi (as in: Buddha).

His brothers correspond to other positive states of mind (the ancient Indians were very precise on the subject), And all five were married to Draupadi, whom yogis understand to be Kundalini, the coiled feminine energy at the base of the spine. Freud called it libido, the Greeks called it Eros.

The Kauravas, the evil cousins, are the negative states of mind — anger, hatred, greed, vanity, envy, arrogance, fear and so forth.

So there it is:

“With no desire for success, no anxiety about failure, indifferent to results, he burns up his actions in the fire of wisdom. Surrendering all thoughts of outcome, unperturbed, self-reliant, he does nothing at all, even when fully engaged in actions.

There is nothing that he expects, nothing that he fears. Serene, free from possessions, untainted, acting with the body alone, content with whatever happens, unattached to pleasure or pain, success or failure, he acts and is never bound by his action.” (BG, 4.19-26)

Boom. Could anybody say it better? Who do you think did say it? Rudyard Kipling, whose two impostors are the seed of my entire book?

Actually, it was Krishna, in conversation with Arjuna, on the eve of an 18-day battle that would kill about four million (!) and which only eleven men would survive. Here are Arjuna and Krishna, his charioteer, in between the opposing armies just before the battle, as Krishna reveals to Arjuna the two crucial secrets to our lives: how to know and do your duty, and how to live. 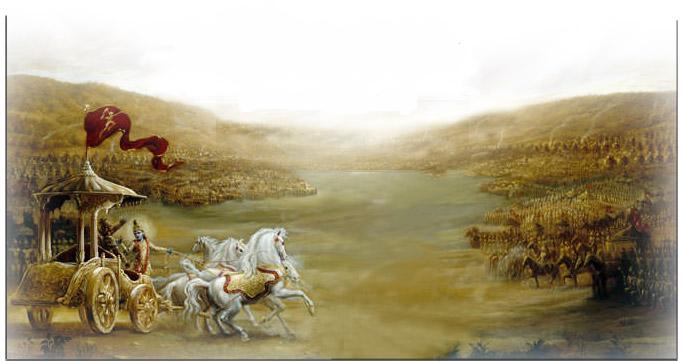 I’m talking, of course, about one of the greatest poems (books, texts) ever written, the Bhagavad Gita, or “song of God”. It is a relatively short song inserted into a huge (!) epic story, the Mahabharata, which is several times the length of the Bible, or of the Iliad and Odyssey combined.

I’ve been re-reading the Gita in several translations while researching one chapter in my book. Why? Because Hannibal faced the same dilemma that Arjuna faced, when he broke down sobbing before the great battle, a battle that he suddenly did not want to fight at all, but which, as Krishna made him realize, he could not not fight. So Arjuna faced the same conundrum that Hannibal and Scipio faced: how to get into the right frame of mind to live life.

Now, for those of you who love the Gita, I thought I’d do a quick review of the three translations and commentaries I’ve recently re-read. That way, maybe, I can help you choose the one that’s right for you.

The Gita is a poem in the original Sanskrit, and the translation that best preserves the beautiful, easy, fluid feel of a poem is the Bhagavad Gita by Stephen Mitchell (Three Rivers Press). The opening quote above comes from his translation.

A slightly less beautiful but perhaps more helpful and accessible translation is The Bhagavad Gita: A Walkthrough for Westerners by Jack Hawley (New World Library). The title sounds as if it were a sort of “For Dummies” version, but it’s not. It’s intelligent, and editorializes a bit whenever the words in the poem mean something very different from the same words in our ordinary language.

Then, of course, there is the intimidating two-volume brick God Talks with Arjuna: The Bhagavad Gita by Paramahansa Yogananda (Self-Realization Fellowship). That is the kosher version among yogis, because it’s academically and intellectually thorough. I’ve tried several times to get through it and failed. If it’s beauty, ease and enjoyment you’re looking for, don’t pick this one. But….

… do pick this one if you have even the slightest interest in a deeper understanding of the Gita. For example, the thing to get about the poem is that there are two battles going on: the external one involving four million warriors and elephants and chariots; and the internal one that we all wage every day. Paramahansa Yogananda is great at the genealogy of all the people in the war, so that you realize, for example, that Arjuna and his four brothers are the intelligent and higher parts of our mind, who are fighting 100 cousins, who are the powerful but lower parts of our mind, such as anger, desire, greed, and so forth.