They could kill my children.

That’s what I think when I’m driving or walking alone and dodging the drivers around me. Yesterday a lady drove at medium speed through a Stop sign and right through the intersection where I was jogging — or rather, where I stopped jogging and jumped out of her way. She was looking only left (I was on her right, other cars straight ahead). And, of course, she was talking on her cell phone — the modern way, by holding the iPhone away from the ear in Speakerphone mode.

The thought that they could kill my children makes me mad, swinging mad, fighting mad. I am a “liberal” (meaning libertarian). But their freedom stops when my children’s security is threatened. 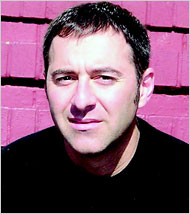 Matt Richtel at The New York Times (who, incidentally, took over my teaching spot at Berkeley’s Graduate School of Journalism when I left) has done a great public service by running a series of articles on the subject to raise awareness. I salute him. I want more of them. Give Matt an award.

But we also have to admit that it has not stopped. They are still texting and yapping about their important things (“like, ohmigawd, he was soooo creepy….”) while driving their killing machines past my children.

The reality is that merely talking on a phone in the car (“hands-free” or not) causes the same cognitive delay as drunk driving. Texting is several times worse.

Eventually, they will pass laws, and those will be ineffective and late. (In the 70s, seat-belt laws were passed after spontaneous social change had already changed behavior. Politicians react to what voters believe already.)

So change must happen differently. How?

It’s a powerful emotion. We don’t like to be embarrassed, even in the face of complete strangers. They did studies (which I can’t find, so if you can, please share the link) that people wash their hands in a public toilet much more often when somebody else is there than when they are alone.

So, we must shame them. How?

I urge and plead with somebody who is reading this to start a blog devoted entirely to posting pictures and license plates of people yapping/texting while driving in flagrante.

Let them see themselves. Let them be googlable.

I promise my support.