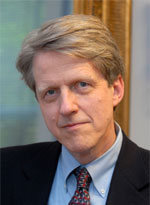 An underlying assumption in my entire thread on storytelling, not to mention the book I’m writing, is that stories are the fundamental thought structures of the human mind.

Storytelling is inevitable, in other words. We do not make sense of the world except by telling stories about it.

So I was intrigued to see this piece in Foreign Policy by George Akerlof (left), an economist at Berkeley, and Robert Shiller (right) at Yale. (Thanks once again to Jag Bhalla for the link.)

The two argue that stories also influence the optimism and pessimism of, and toward, entire nations and economies.

They give the fascinating example of José López Portillo (left), a Mexican president of the 70s and 80s, who presented his country, Mexico, in the context of an ancient story about the Aztec god Quetzalcóatl (also the title of a novel López Portillo had once written). The god was expected to reappear at a special time to make Mexico great again.

As it happened, this was during the oil shocks of the 70s and oil was being discovered in Mexico. Perhaps Quetzalcóatl’s time was now? It did not go unnoticed that the presidential jets were named Quetzalcóatl and Quetzalcóatl II. The country and foreign investors liked the story, and Mexico’s economy surged.

Until it stopped surging, of course. That’s when a different story took over.

The point, as Akerlof and Shiller put it, is this:

Great leaders are first and foremost creators of stories…

Indeed, the power of stories is such that

We might model the spread of a story in terms of an epidemic. Stories are like viruses. Their spread by word of mouth involves a sort of contagion.