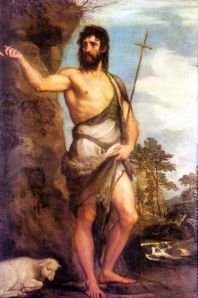 There on the left you see John. He baptized people.

And on the right you see Hannibal. He vanquished Romans.

John is not in my book, whereas Hannibal is its main character, but that’s neither here nor there.

I just figured out a rather exciting linguistic connection between their names. (“Exciting”, that is, if you’re a language geek.)

John comes, via Indo-European Greek and Latin, from either the (Semitic) Hebrew Yochanan or the (equally Semitic) Aramaic Youhanna. That origin is clearer in some other European languages, such as German Johann/Johannes.

And Hannibal is our transliteration of HNB’L, a Punic word. Punic was a Roman mispronunciation of Phoenician. It was the language of Carthage and of Phoenicia, and thus also Semitic.

I’ve already posted about the close family connections between Punic, Hebrew, Arabic, Aramaic and other Semitic languages, by using Hannibal’s family name, Barca, as the example. The relationship is as close as that between, say, Dutch, German and Danish, or between Spanish, Italian and Rumanian.

Favor and the gods

Now to the meaning of the two names:

According to Luke 1, 13, the angel Gabriel visited Zechariah and told him that his old and infertile wife would bear him a son and that “you shall name him John” (ie, Youhanna).

The footnote in my bible says:

The name means “Yahweh has shown favor,” an indication of John’s role in salvation history.

As in: Yahweh’s favor.

That’s Baal (or Ba’al) as in the god that Yahweh is so jealous of in the Old Testament, because he’s one of those Semitic deities so popular in Canaan, where both Phoenicians and Jews lived.

So John was favored by one, Hannibal by the other. Name is destiny. 😉