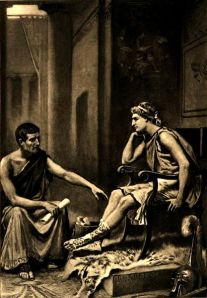 Mentor was the wise old man whom Odysseus left behind to look after his son Telemachus while Odysseus went off to fight the Trojan War. Odysseus, of course, would be gone for twenty years in total, so Mentor played an important role in pointing Telemachus in the right direction.

Carl Jung later believed that Mentor was one of the archetypes in our collective unconscious, a character that appears in our dreams and in any good story. Think Obi-Wan Kenobi for Luke Skywalker.

So I’ve been thinking about Mentors as I feel myself into the characters in my book. What roles does a Mentor have to play? What makes a bad mentor? And, of course, who were my mentors?

Contrary to the Hollywood image, I don’t think that a good mentor necessarily needs to spend a lot of time with a young person. Instead, he or she is just somebody who shows up at crucial moments, takes a genuine and benevolent interest, and gives a fillip or advice where it is needed.

I am reminded of how David Williams, the first Westerner to study Yoga with Pattabhi Jois (in the 1970s!), once explained to me (as we were practicing yoga in David’s garage in Maui, with his Bernese Mountain Dogs running around us) the concept of guru. Gu means darkness in Sanskrit, Ru means light. So a guru is someone who “lights your candle” but then lets you go, indeed sends you off. An older person who passes himself off as a guru but tries to keep control over you, who lingers, is a fake guru.

Speaking only in the context of my writing career, I had three mentors, I believe.

I first met Clive when I was twenty-two or so. I was out of work and confused about life and flew to London on a whim to “interview” with The Economist and the FT, even though I don’t recall having set up any actual appointments. I had the flu, and it was raining. I was down and out. Somehow I got into “the Tower”, as we call our 50s-style building in St. James’s Street, and into Clive’s office. He was perhaps economics editor at the time. He sat in a tiny office with stacks of books all around him that I thought would come crashing down on him any minute. To my shock, he didn’t call security but … talked to me.

Nothing immediate came of that, but many years later I was in some god-awful investment bank and fed up. I wanted out, and into journalism. I wrote Clive a letter. To my renewed shock, he remembered me and was now deputy editor. He invited me to sushi. Again, nothing came of it, but he said something might open up. He advised me to get out of that stupid bank and go to a small sweatshop magazine that was known to take young journalists with no experience. I did. Five months later, he took me out to sushi again. Then I joined The Economist. He saw something in me, and that’s why I have my job today.

As I said earlier, the job of a guru is not to stick around forever but to let go at the right moment. Once I arrived at The Economist–rather clueless, I should say–Clive stepped back and another editor, Marc Levinson, stepped up as a new mentor. He was very New York in a very British place. He had recently taken over the job of editing the finance section in the magazine, and was controversial. Some people said he was “dumbing the paper down” (he would have said that he was making it comprehensible and unintimidating.) And he was, by the occasionally evasive standards of British toffs, brash.

He certainly put me through the wringer. On Wednesdays, which are our deadline days (London time), I was occasionally close to tears as he made me re-write the piece I had just filed. He minced no words. “This anecdote is flat, take it out!” “You’re not ready to write this piece yet; go out and find something out!”

Over time, three things occurred to me. 1) He was tough in my face but supported me like a rock behind my back. This is the inversion of normal. People like that are a certain kind of nobility. Over time, I saw actual tenderness in his toughness. 2) While he often re-wrote my copy, he also often forced me to re-write my own. Again and again. He could have saved himself time by just doing it himself. He didn’t want to. He wanted me to learn. 3) I got… better!

Marc left The Economist and went home to New York, where he is the author of a fantastic book called The Box. And thus we parted ways. But if Clive discovered my potential, Marc made me fulfill it.

Years later again, I arrived in California from Asia. One of the Sinologists I had always heard about in China was Orville Schell, who was now dean of the Journalism School at UC Berkeley. I sent him an email to see whether he might like to meet some time, and, to my surprise, immediately got a message back in which Orville invited me to lunch at the Faculty Club.

Some time after that, he invited me to … teach! This was amusing to me, because I considered (and will always consider) myself a learner. But hey. If Orville Schell asks me to teach a class, who am I to say No? I said Yes.

For two years, I was a teaching fellow at his school. Just as Clive and Marc had no reason to take an interest in me but did, Orville inexplicably included me in all sorts of events. Interesting people were always coming through, and Orville liked to take them to Chez Panisse for dinner. Very often, he invited me to come along. (My greatest regret is that the night that he took David Halberstam to Chez Panisse and was looking for me to invite me along, I was somehow not to be found. Halberstam died in a car crash the next day.)

As a good mentor, Orville also knew just when to step in forcefully with advice and when to bow out. Three years ago, before I had the idea for the book that I am now writing, I was approached with an unusual offer/opportunity. A literary agent who had researched me and liked my writing asked me to write a book about an extremely large and interesting organization (one that you all use every day). The money was good and to spice it up he had already arranged for exclusive and intimate access to the key individual, whose co-operation might make the book great. I was taken aback but very tempted. But something bothered me. I didn’t know what.

I went into Orville’s office and he immediately made time for me (!). He listened to the situation. Where I was unsure and hesitant, he was forceful and sure. “Don’t,” he said. “If you want to write a book about BLANK, then write it, but don’t take this deal. It will compromise you forever.” And if I didn’t want to write this particular book, well, why was I even contemplating it?

I knew that he was right on the spot. But Orville then grabbed me and led me into the courtyard, where Michael Pollan, author of the Omnivore’s Dilemma and other bestsellers, was mingling. Orville explained the situation, asked Michael to give his opinion, then walked away so that he would not influence the conversation. Michael said exactly the same thing.

And so, I learned a great deal about character, ethics, books, writing and life in one day.

Here is to Clive, Marc and Orville, to Mentor and to Aristotle. May every Telemachus find one at the right time!

7 thoughts on “My mentors”