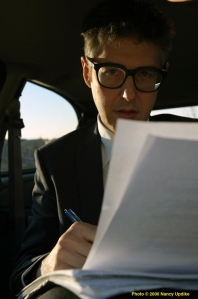 So what makes a good story good? That’s where we left off last time in this series on the art of story-telling.

To begin deconstructing the magic, listen to th amusing and thought-provoking video talk below by Ira Glass, the host of NPR’s This American Life and a great story-teller. (I already mentioned once just how good a story teller I consider him to be when I praised the episode that explains the current financial crisis and that remains the most memorable, clear and touching piece of journalism done on that subject.)

In the talk, Glass says what I’ve always thought: that journalism, and the American sort in particular, imposes a “fake gravitas” on stories by artificially separating the world into a) serious or b) funny, with a barren no-man’s-land in between. Glass calls this a “failure of craft”–the craft being story-telling.

What he and his team do, and what so many other journalists don’t do, is to “inject joy and pleasure” into stories. They choose–and I love his way of putting this–

stories whose aesthetic is suprise.

There is no fake or contrived grandness, at least not in the conventional sense. Somehow, these very human characters make us feel right from the beginning that

something is about to occurr.

Why we feel that way we cannot quite say, because this is

not about reason but emotion.

Events seem to “accumulate”, and they seem to be

heading in a direction.

In the process, the story-teller is constantly

And now, just as they are hooked, there is a surprise. What seemed small suddenly reveals itself to be about a

The big idea comes effortlessly but forcefully in a rhythm not unlike that in Beethoven’s Fifth:

And so, what seemed small was really grand after all! Only, there was no need to yell at the audience at the start. It became clear all by itself.

Fittingly, Glass then illustrates all of this by choosing the story of Scheherazade, whom The Hannibal Blog anointed as the matron saint of story-tellers in the previous post.

I just came across Glass’s talk but, as you can imagine, I felt as though I were meeting my soul mate. All of this is exactly what I have been trying to do in the book manuscript that I just sent off to my editor this week.

5 thoughts on “Humanity, suspense and surprise in storytelling”