Down under in Melbourne, Solid Gold Creativity has embarked on an intriguing investigation into sex (or “gender”, as the Americans among you might prefer in this context) in journalism.

With a research assist from Phillip S Phogg, she then turned her attention to America, where she found that women wrote:

(Both of those are five-issue averages.)

So, naturally, I offered to supply the relevant metrics for The Economist.

At first, I started counting the articles in our current issue by author’s sex. (You out there cannot know who the authors are, of course, because we don’t have bylines, but I have an internal list to aid me.) Then I realized that this doesn’t give a good picture, because we are too small. If one or two people are on holiday, that skews the numbers. Then a freelancer writes the odd piece; or somebody writes a big piece and a box to go with it; or several people collaborate on one story, and on and on.

So instead I counted the editorial staff, both total journalists (ie, correspondents + editors) and editors. (I defined as editors only colleagues who actually edit a section in the magazine or a part of the website, not those who have editor as part of their title on their business card.)

Here is what I found:

Of the 84 journalists (I tried to correct for those on sabbatical, those half-retired, and so forth) 19, or 23%, are women. 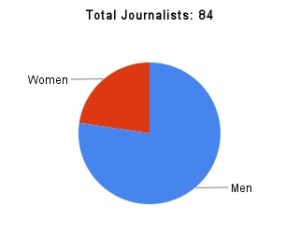 And if I had excluded the website from the numbers and counted only the magazine, the share of women would have gone up both among total journalists and editors.

That said, the percentages are still well below 50%.

Now, I quite like something that Solid Gold Creativity said in her comments:

… I’m not so interested in the “reasons” for this absence of female thinkers/writers. I can always think up a hundred reasons why something is one way or another. My interest is not “why”; my interest is what’s so…

In that spirit, let’s find out more…

7 thoughts on “The Economist’s women and men”