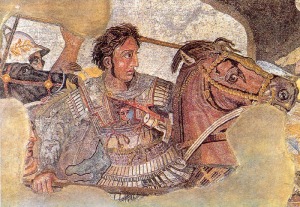 Alexander the Great was busy conquering the known world once, when he saw, on the banks of the Indus river in today’s Pakistan, a naked guy sitting in the Lotus position and contemplating the dirt.

“Gymnosophists” (gumnos = naked, sophistes = philosopher) the Greeks called these men. We would call them yogis — as in: Patanjali, say.

“What are you doing?”, asked Alexander.

“Experiencing nothingness,” answered the yogi. “What are you doing?” 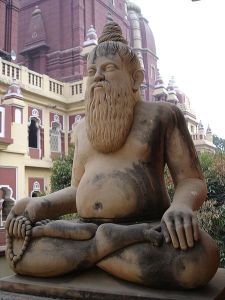 Then both men laughed, each thinking that the other must be a fool.

“Why is he conquering the world?”, thought the yogi. “It’s pointless.”

“Why is he sitting around doing nothing?”, thought Alexander. “What a waste of a life.”

Thus Devdutt Pattanaik tells the story in the TED talk at the end of this post. (Thank you to Thomas for the link. Was it Thomas?)

Devdutt used to be successful and bored (the two can go together) in the pharma industry until he decided instead to make a living out of his passion, which is comparative mythology, by applying myths and storytelling to business. Wow. That’s exactly what The Hannibal Blog (at least in part) tries to do.

But let’s get back to this specific little anecdote (which echoes another such encounter Alexander was said to have had). It makes a perfect transition in my thread on heroes and heroism from the Greek and Roman heroes of antiquity to the Eastern heroes of antiquity.

As Devdutt says, Alexander grew up with the stories of Hercules, Theseus and Jason, which told him:

The yogi grew up on up on different stories — the Mahabharata (which I love) and Ramayana and so forth. His heroes, such as Krishna and Rama, were not distinct individuals who lived once and made it count, but different lifetimes of the same hero.

The yogi’s stories told him that:

To approach this in a slightly different way:

In my last post on Aeneas, I argued that he was “the first western hero whose internal journey is as important as his external journey.” Well, I put the word western in there for a reason: Because I was already thinking of Arjuna, to whom I must turn in a separate post.

40 thoughts on “Alexander meets a yogi: Who’s the hero?”