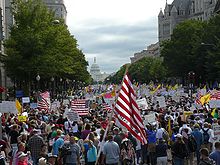 I’ve been spending the weekend talking to various visitors from Europe, and they are, shall we say, fascinated by the American mood this year.

The country, a superpower that is hard for foreigners to ignore even when they try, seems to have gone loony-potty. A movement is afoot that wraps itself in a historic-sounding name, the Tea Party, then feeds on undistilled anger to rebel against… well, it’s not clear against exactly what.

The Hannibal Blog embraces intellectual contradictions as though they were steps in a Jacob’s ladder toward more humble and refined views. The Tea Party, on the other hand, won’t even acknowledge its contradictions. That’s the wrong way to go on a ladder.

And so we return once again to Polybius (Histories, VI, 57), who so influenced our Founding Fathers (those of the real Tea Party), and who seemed, about 2,150 years ago, to have something to say about America in 2010:

When a state, after warding off many great perils, achieves supremacy and uncontested sovereignty, it is evident that under the influence of long-established prosperity life will become more luxurious, and among the citizens themselves rivalry for office and in other spheres of activity will become fiercer than it should. As these symptoms become more marked, the cravings for office and the sense of humiliation which obscurity imposes, together with the spread of ostentation and extravagance, will usher in a period of general deterioration. The principal authors of this change will be the masses, who at some moments will believe that they have a grievance against the greed of other members of society, and at others are made conceited by the flattery of those who aspire to office. By this stage they will have been roused to fury and their deliberations will constantly be swayed by passion, so that they will no longer consent to obey or even to be the equals of their leaders, but will demand everything of by far the greatest share for themselves. When this happens the constitution will change its name to the one which sounds the most imposing of all, that of freedom and democracy, but its nature to that which is the worst of all, that is the rule of the mob.

54 thoughts on “What Polybius said about the Tea Party”