The biggest social event of the year 1878 in Palo Alto, California, took place on a horse-breeding farm. Leland Stanford, former governor and co-founder of the all-powerful Southern Pacific Railroad, had retired and was indulging, here at the site where he would soon found Stanford University, in his passion, which was anything equestrian.

Stanford was, at a general level, an alpha male who trusted his own opinions. More specifically, when it came to horses, he considered himself “an expert”. So it was utterly clear to him that he, the expert, knew how horses galloped.

After all, all you had to do was look! And Stanford had looked, as had artists throughout all of human history. It was obvious that horses briefly “flew” by splaying their four legs in the air before alighting for the next leap. Like this:

So Stanford, as this account tells the tale, made contact with Eadward Muybridge, an eccentric Briton who had mastered the cutting-edge technology of the day, photography, and was able to take photos in rapid succession. Muybridge brought his kit to Palo Alto.

At Stanford’s invitation, large crowds turned out for the occasion. Muybridge was to document a galloping horse and thus prove common sense.

Muybridge’s photos did nothing of the sort. Instead, they were shocking. For they disproved mankind’s common sense, thereby contradicting the direct observation of many generations.

You can see this disproof above, in the (deservedly famous) animation derived from the images. If you want to be sure, you can look at the stills in one of the other sequences: 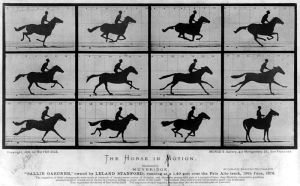 During the only instant in the cycle when the horse is entirely in the air, its legs are actually tucked together, not splayed.

After Muybridge’s breakthrough, mankind thus had some adjusting to do, not least its painters:

Artists of the day were both thrilled and vexed, because the pictures “laid bare all the mistakes that sculptors and painters had made in their renderings of the various postures of the horse,” as French critic and poet Paul Valéry wrote decades later… Once Muybridge’s photos appeared, painters like Edgar Degas and Thomas Eakins began consulting them to make their work truer to life. Other artists took umbrage. Auguste Rodin thundered, “It is the artist who is truthful and it is photography which lies, for in reality time does not stop.”

(Does Rodin’s reaction remind you of anything today?)

The big point here is really that we should be less confident in (= more skeptical about — however you want to put it) our own opinions and grasp of reality. That’s because:

In that sense, this post is a follow-up on

This topic seems to strike a chord with writers and journalists in particular. The other day, for instance, I was discussing it with Rob Guth, a friend of mine at the Wall Street Journal. Rob recently wrote great stuff about the surprising recollections of Microsoft co-founder Paul Allen (surprisingly negative about Bill Gates, in particular). As Rob got deeper and deeper into his research — meaning: as he “fact-checked” his sources’s memories of Microsoft’s early years — the “truth” became ever more elusive. Was so-and-so in the room all those years ago when such-and-such happened? A says Yes, he was. B says No. Suddenly A begins to doubt himself (re-narrating the story in his mind). And so on.

Journalists, of course, are not the only ones relying on the recollection or observations of others. Judges, lawyers and jurors do as well, to name just one particularly germane area.

Can you trust eyewitnesses?

In this article, Barbara Tversky, a psychology professor, and George Fisher, a law professor, suggest that eyewitnesses cannot always be trusted. (Since witnesses are at the heart of the adversarial legal system, this undermines our entire tradition of justice.)

As Tversky and Fisher say,

Several studies have been conducted on human memory and on subjects’ propensity to remember erroneously events and details that did not occur. …

Courts, lawyers and police officers are now aware of the ability of third parties to introduce false memories to witnesses…

But even without such tricks,

The process of interpretation occurs at the very formation of memory—thus introducing distortion from the beginning. … [W]itnesses can distort their own memories without the help of examiners, police officers or lawyers. Rarely do we tell a story or recount events without a purpose. Every act of telling and retelling is tailored to a particular listener; we would not expect someone to listen to every detail of our morning commute, so we edit out extraneous material.

In fact, these studies show what Rob discovered during his interviews of sources for the Paul Allen story:

Once witnesses state facts in a particular way or identify a particular person as the perpetrator, they are unwilling or even unable—due to the reconstruction of their memory—to reconsider their initial understanding.

Memory is affected by retelling, and we rarely tell a story in a neutral fashion. By tailoring our stories to our listeners, our bias distorts the very formation of memory—even without the introduction of misinformation by a third party…. Eyewitness testimony, then, is innately suspect.

It is not necessary for a witness to lie or be coaxed by prosecutorial error to inaccurately state the facts—the mere fault of being human results in distorted memory and inaccurate testimony.