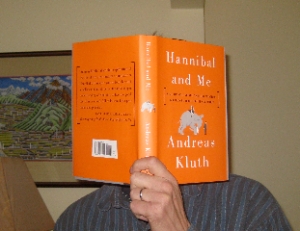 Who is Mr Crotchety?, you ask.

He (and I am reasonably confident that he is indeed both human and male, as allegedly pictured above) first presented himself to me in 2008, when he wrote a reader letter to The Economist about a piece I had written (about “Slow Food”). Here is that letter:

Regarding: (11 Sep 08) Revolutionaries by the Bay

Many years ago I sat down in a Slow Food restaurant in New England. It seems like only yesterday when I walked out. The food was not memorable, but the service was glacially slow and inattentive (this was before global warming). Does the service have to be European also?

That set the tone for all that was to follow. Mr Crotchety, possibly encouraged by me, poured himself into the blogosphere and, under his increasingly notorious nom de guerre, began spreading his wit more widely.

Here on The Hannibal Blog, for example, we were soon turning the epic tale of Hannibal the Carthaginian into its … limerick version. (Read through the comments in that post, too: We expanded the mission to Zen Senryus.) In retrospect, it is hard to believe that both Polybius and Livy overlooked such an obvious literary device.

But Mr Crotchety never over-indulged himself with his blog commentary. Sometimes he crotched, sometimes he didn’t. Over time, I became aware that an entire subculture of the blogosphere was secretly yearning for one of his ambushes. They bestowed the ultimate kudos.

All of which is a long-winded way of saying that this same Mr Crotchety has now, via Sprezzatura, written his own and inimitable review of Hannibal and Me. Follow the link, and may the kvetching and crotching continue over there….

8 thoughts on “Hannibal and Me … and Mr Crotchety”