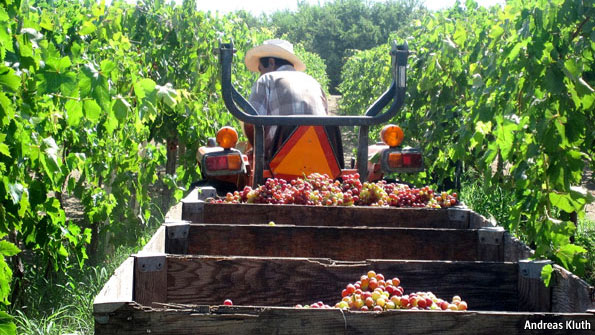 Well, it’s time again for our (The Economist‘s) annual Christmas issue — a double issue (meaning that it is on news kiosks for two weeks instead of the usual one).

My piece in this one is called Migrant farm workers: Fields of Tears.

(The title of this post explains itself if you read the article.)

They even used one of the pictures I took with my dirty, sweaty, unsteady hand while picking grapes in August (I posted about it at the time). So, even though we don’t get bylines at The Economist, I did get a tiny picture credit in the bottom right! 🙂

In late October, I posted a cryptic and coy entry here, in which I talked about an exchange with one of my editors, after she told me that

The subject-matter is so emotionally strong that it will work better if the tone is flatter.

This was, in fact, the piece we were talking about and editing at the time. So now you can read it and judge for yourself if flattening the tone was the right decision.

Another point worth mentioning is that my first draft was, well, bad. The reason was one that you may find sympatico (during my research, we had a baby, so I had other things on my mind and took a shortcut, writing before I was ready). But a good editor owes it to the writer not to let those half-hearted pieces slip through.

So my editor called me on it. She has a beautifully frank manner, which sugarcoats nothing (and thus makes her praise, whenever it comes, uniquely credible).

Back I went, after my paternity leave, to finish the research (which was harder than it is for most of my pieces). And then I wrote what turned out to be the real piece.

During the frantic copy-editing in the final hours before the pages were printed, I thanked my editor for her intervention:

… you did me the honor of being frank, thus saving me from a bad piece and forcing me to turn it into a decent one. You’re the best editor I’ve ever had. It’s all about trust: the editor has to trust the potential of the writer (and demand that it be reached); and the writer has to trust the judgment and intention of the editor.

She replied with some touching personal comments, and then this summation, which tells you more about The Economist than you would ever understand simply by reading our magazine:

… I also think the genuinely nice atmosphere at the econ–in contrast to many other papers–is important here. People generally believe they’re working together, not against each other.

45 thoughts on “The humanity in a Joad and a Vega”