If you’re taking a 12-minute cappuccino break, watch me give this “teaser” about my book at our (The Economist‘s) recent innovation conference in Berkeley.

(You’ll also find most of the other sessions on video now, including those with Arianna Huffington, Jared Diamond, Matt Mullenweg, et cetera.)

I’m not good at “teasers” or “elevator pitches”, especially since I tried to tell a story in my book that would keep you reading for 100,000 words. But I’m constantly being told that I now have to practice condensing that story into two seconds for some occasions (cocktail parties, elevators), two minutes for other occasions, 10 minutes for yet others, and so on.

So, er, I’m practicing. (Even while determined not to give too much away yet.)

Your feedback would be welcome. Do I snare your interest or do you say ‘so what’? Are there howling non sequiturs, or does it make sense? And so forth.

And here, as promised, is the video of Tuesday’s debate. (If you’re new to The Hannibal Blog, I’m talking about this debate.) I kick things off, followed by Gray Davis, and it gets both humorous and intense rather quickly.

Your arm-chair analysis in the comments is encouraged. And don’t be polite. 😉 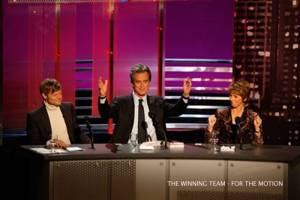 Here we are (I’m on the left, Bobby Shriver is in the middle, Sharon Waxman on the right), as the vote comes in, telling us that we “won” last night’s debate against Gray Davis, Lawrence O’Donnell and Van Jones.

The motion, as a reminder, was:

California is the first failed state

and we argued For.

We won because we moved more audience members in our favor.

I’ll be posting the full video here on Friday (Update: I have now posted the video), but just a few remarks.

First, it was great fun. As soon as the debate was over, we went to dinner together (“we’re living a Woody Allen movie,” somebody said as we descended into the quaint, subterranean New York restaurant) and had a great time. I talked for a long time to Gray Davis and his wife Sharon, and they were much more interested in discussing California (and that recall) than the debate proposition. I learned a lot.

Well, we were all trying to “win” last night, but now that it’s over it’s time to say that this was just a great, fun game. The real way to “win” was to edify and entertain the audience and ourselves, to spar and to learn, and we apparently did that. (If you were in the audience, feel free to agree or disagree below. ;))

So the goddess Eris was there, but she had her tongue in her cheek.

Second, and unrelated: What a difference a year makes! A bit over a year ago, I was telling you how I heroically resisted mile-high connectivity. Well, I’m posting this from the sky, in a Virgin America plane back home. And everybody around me is working on their laptops. We are all now Nomads, as I predicted. Don’t shrug because you’ve already done this, too. Don’t take it for granted yet. Join me, as Albert Einstein would, in wonderment.

I’ll have a thorough post-game analysis of the debate later this week.

So we now have the speaking order at next Tuesday’s Oxford-style debate in New York about the motion:

California is the first failed state.

In the opening remarks, which are 7 minutes each, I go first, followed by former governor Gray Davis. The full line-up is as follows:

In the closing remarks (2 minutes each), the line-up is:

May the audience be edified.

Well, this should be fun.

An amicable, edifying and ultimately futile debate (the sort The Hannibal Blog loves) in January, between, on one side:

and, on the other side,

My team will argue that, yes,

California is the first failed state.

The other guys will argue the opposite.

Then the audience will annoint the winners.

Feel free to suggest debate strategies/arguments (for either side!) in the comments.

On the even lighter side (and still off message, but not much longer): one of you has made me aware of an author named William Monahan, who wrote this sentence in the final installment of his serial story Dining Late with Claude La Badarian (reviewed here):

I was able to convince the police, after a few minutes difficulty on the landing (I was coming back from the shower, inconvenienced by precarious towel, soap-on-a-rope in the form of Sneezy the Dwarf), that I was not “Claude Le Bandarian,” blackmailer, but a paperless German anthropologist named Andreas Kluth.

I would be flattered, but No, as far as I know, I cannot have inspired this reference. (Paperless? I try. German? Largely, but that’s between us. Anthropology? More as object than subject. Andreas Kluth? Unequivocally.)

I admit that my name is not exactly household. But you do notice that I couldn’t get the .com or .net domains. I’m aware of a municipal politician somewhere in Germany who has my name. He must be the anthropologist. 😉

That guy with the cigar on this West German stamp from 1987 is my great-uncle, Ludwig Erhard, or “Onkel Lulu” in our family.

Why is he on this blog? 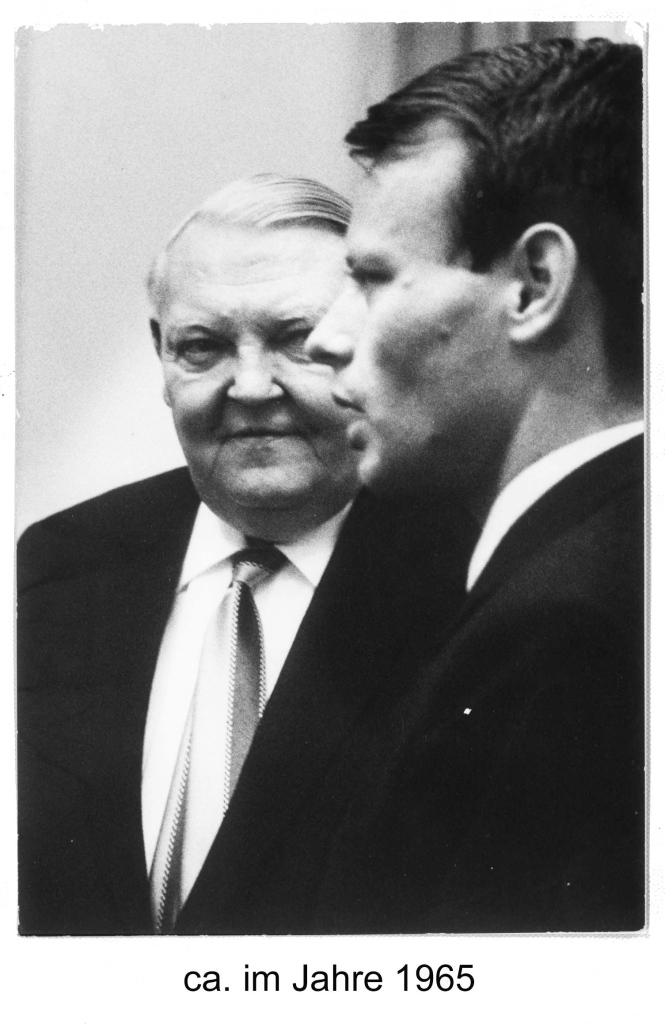 Newspaper cutting of my dad and his uncle

Because is life is one of those I trace in my book, to show that that what happened to Hannibal and Scipio happens to all of us, one way or another.

My dad pouring tea for his uncle, the chancellor, in the 60s

In Germany and continental Europe, Ludwig Erhard is a household name. In America, he is not, but should be. He is famous for being a founding father of post-war (West) Germany, its first economics minister, the father of its currency (the Deutsche Mark), and then its second chancellor (ie, prime minister). He is credited with causing the stunning economic growth of the 1950s, sometimes called (but not by him) an “economic miracle”. And he is probably the most steadfast proponent of freedom, tolerance and open and fair markets in German history.

As my father’s uncle and godfather, he practically raised my father after my grandfather died. I only met Lulu when I was very small (he died in 1977). He liked to hide Easter eggs for me in his steep hillside garden by the Tegernsee, an Alpine lake south of Munich. His influence lives on, in Germany, in our family, and now in my book. 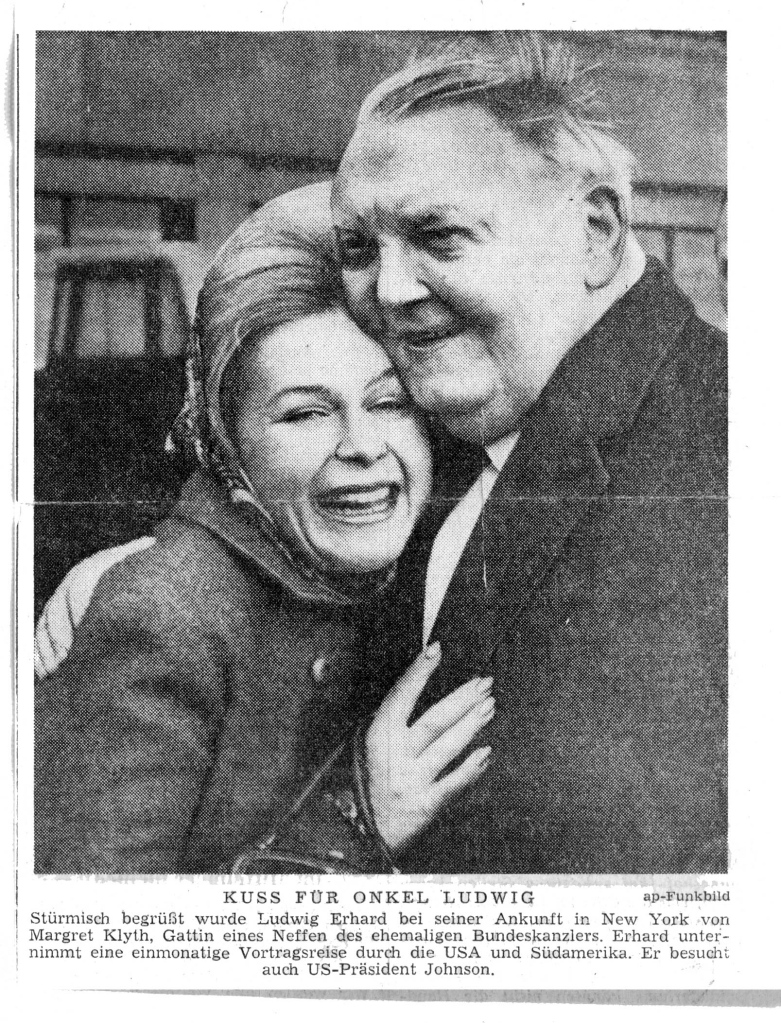 My mom with Lulu in New York, where I was born

Abhishek and I are talking for half an hour in this podcast about my book. The Indicast, if you don’t know it, is an up-and-coming podcast show in India.

We’re really having fun and getting side-tracked a bit, so it’s not until 16 minutes in that I actually summarize the book’s plot. The sound quality is a bit grainy, because I’m talking from California, and Abhishek from Mumbai.